We are investigating customer complaints against LPL Financial.  If you or someone you know has a complaint with an LPL Financial advisor, please call us at 212-203-9300 for a free and confidential attorney consultation. 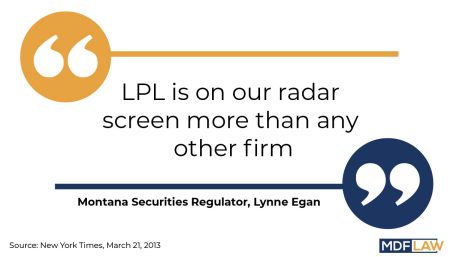 At LPL Financial, a Long History of Customer Complaints and Supervisory Failures

To the average investor, LPL Financial might look no different than any other major advisory firm. With more than 17,500 advisors spread across the country and more than $1 trillion in assets, the firm services more than 4 million accounts. As the New York Times observed in 2013, it’s an especially popular choice for customers in rural America, where its representatives maintain their own independent offices free of the trappings of stodgy old institutions like Morgan Stanley and Merrill Lynch.

What the average customer might not recognize from the surface, however, is LPL’s long history of customer complaints and regulatory censure. As more-or-less independent contractors, many LPL representatives double as their own supervisors. Since its formation in 1989, the firm has earned sanction after sanction from state and federal securities regulators. Its brokers and advisors, meanwhile, have earned scores of customer complaints, many of them resulting in substantial awards—on top of the millions the firm’s paid in fines and settlements connected to regulatory matters.

In 2012, for instance, Massachusetts securities regulators sued LPL Financial over alleged failures to supervise non-traded real estate investment trust (REIT) sales. According to authorities, the firm made $28 million in non-traded REIT sales in the state between 2006 and 2009, generating gross commissions of at least $1.8 million. At least 95% of these transactions violated the state’s securities regulations and even the products’ own prospectuses, according to charging documents. The firm was ultimately ordered to pay $500,000 in fines and restitution in this action, only one of several taken by the Massachusetts Securities Division over the last decade.

In 2015, the Financial Industry Regulatory Authority ordered LPL Financial to pay a fine of $10 million—plus $1.7 million in restitution—over various supervisory failures. According to FINRA, the firm failed to supervise sales of complex products like exchange-traded funds (ETFs), variable annuities, and non-traded REITs. In the case of the REITs, the firm allegedly neglected to identify customers eligible for sales charge discounts. FINRA additionally found that LPL’s trading activity review system failed to alert supervisors to possible risky activities, including signs of money laundering.

As FINRA told the New York Times after the 2015 fine, LPL’s problems may have stemmed in part from its rapid growth. As it doubled its affiliated brokers over the preceding years, it did not commensurately grow its supervisory systems. Its loose corporate structure, with lower overhead than other large firms, reportedly incentivized representatives to sell complicated, risky products like non-traded REITs that came with meaty commissions. At the same time, its alleged supervisory deficiencies empowered some representatives to take serious advantage of their customers.

In December 2017, a FINRA panel ruled that LPL Financial failed to supervise its former broker Charles Fackrell, who pleaded guilty in 2016 to operating a $1.4 million Ponzi scheme in 2016. He was ordered to serve a 63-month prison sentence plus three years of supervised release, in addition to the $820,000 in restitution he was ordered to pay the customers who invested in the scheme.

An April 2016 release by the US Attorney’s Office for the Western District of North Carolina alleged that Fackrell solicited his victims to invest in entities with the name “Robin Hood,” promising that their funds would be invested in gold and other precious metals. While he falsely told his customers that Robin Hood “was a very safe investment, paying guaranteed annual returns of 5% to 7%,” he in fact directed the funds toward personal expenses like hotels, groceries, medical bills, and “large cash withdrawals.” He also used investors’ funds to pay back other investors, according to prosecutors, who described him as an “unscrupulous scammer that betrayed those who trusted him with their nest egg.” In sum, his scheme involved $1.4 million in funds and at least 20 clients. Prosecutors also alleged that he attempted to cover up his activities by asking a “third party to destroy a computer and documents” related to them.

While he operated the scheme, Fackrell was based in LPL Financial’s office in Yadkinville, North Carolina, according to a report by Investment News. His customers “included retirees who worked as a mechanic, machinist and horse trainer,” and they invested as much as $100,000 in the Robin Hood entities. In its ruling against LPL Financial, FINRA ordered the firm to pay $322,000 to three sets of customers, as well as $130,000 in costs and fees. The firm was separately fined $25,000 by North Carolina securities authorities and ordered to pay $270,000 to reimburse the state for its inquiry into Fackrell’s conduct.

In 2015 FINRA awarded treble damages to two customers in a complaint regarding LPL advisor Samuel Izaguirre, who contracted with their local bank to provide investment advisory and brokerage services. The customers were an elderly woman and her daughter, who doubled as her power of attorney. At Izaguirre’s recommendation, the daughter withdrew $9,000 from a maturing certificate deposit. What she didn’t realize—not until she visited her tax preparer some time later—was that the CD was part of her mother’s IRA, and the $30,000 withdrawal incurred a tax penalty of $9,000.

As the customers’ complaint described, that $9,000 was worth more than half the daughter’s annual income. It also equalled about three months of care for her elderly mother. When she alleged that Izaguirre failed to explain the withdrawal’s tax implications, LPL responded that the CD did not qualify as an investment and that neither Izaguirre nor the firm had any responsibility for it. “This meritless claim is little more than an attempt by the claimants to have LPL pay their tax bill because they failed to act in a timely manner,” argued LPL. “A tax bill that has no connection to an LPL account, where the funds relating to the transaction were never deposited or custodied by LPL.”

FINRA ultimately ruled in favor of the customers, finding that Izaguirre and the firm breached their “position of trust” by providing incomplete information about the IRA withdrawal. The award, which included compensatory damages, treble damages, and attorneys’ fees, also found Izaguirre and LPL liable for financially exploiting an elderly person. In a statement to Investment News at the time, LPL said it “respectfully disagrees” with FINRA’s ruling.

More recently, federal prosecutors charged a former LPL advisor with fraud in connection to allegations he stole more than $2.8 million from his clients. The advisor, James Couture, was associated with LPL’s office in Worcester, Massachusetts from 2009 until 2020, when he was discharged over allegations of altering identification on account statements and co-mingling funds.

In June 2020 the US Attorney’s Office for the District of Massachusetts filed charges alleging Couture committed three counts of wire fraud and one count of aggravated identity theft. Prosecutors state he misappropriated $2.8 million by transferring funds from his customers’ accounts for “investment in fictitious funds.” He allegedly used the money for other purposes, like purchasing a client list and making payments of falsified investment returns to other investors. He allegedly even cashed out a customer’s mutual funds and “raided” a retirement plan under his management in order to fund another customer’s withdrawals.

Authorities reportedly offered Couture a plea deal that he recently rejected, leading to additional charges of wire fraud, identity theft, and investment adviser fraud. After he allegedly tried to sell his house in Cape Cod—plus a $100,000 wine collection—prosecutors secured a restraining order preventing him from selling certain assets without an officially agreement to direct any funds generated from these sales to victim restitution and forfeiture. The charges against Couture, who was barred by FINRA in 2020, remain pending.

Even after the $10 million fine over its supervisory failures in 2015, LPL continued earning regulatory scrutiny of its oversight practices. FINRA fined it again last year—this time for $6.5 million—over allegations of supervisory failures, including another alleged Ponzi scheme. In that case, the broker in question pled guilty to securities fraud in connection to the $1 million scheme. Other matters at issue in the sanction included client record-keeping deficiencies and failures to fingerprint employees for background screenings.

In a statement about the fine, LPL told Investment News it takes its compliance obligations “very seriously.” Earlier that year, it was sanctioned by New Hampshire securities authorities in connection to a representative, Dain Stokes, who sold fraudulent investments. The firm was fined $400,000 over findings it failed to supervise him.